Edit
watch 01:36
We're Getting Mutants in the MCU - The Loop
Do you like this video?
Play Sound

George Pillson is the devoted gentleman-in-waiting of Mrs. Emmeline Lucas, always ready to take part in her schemes and vendettas for the title of undisputed society queen.

Lucia’s devoted acolyte and chief courtier. Georgie is always beautifully dressed, a skilled embroiderer and even more skilled gossip. Aware of his reputation as the Jeune-premier of Riseholme, he carefully dyes and arranges his thinning hair to blend into his toupee.

Although he occasionally bridles at Lucia’s hold over him, he is not a natural Bolshevik. He’ll leave the warfare to Lucia, preferring to indulge in more cultured pursuits. He and Lucia enjoy musical evenings together in which they play ‘for the first time’, pieces they have been furiously rehearsing in private. In truth, Georgie would be at a loss without Lucia, yet the thought of any romantic attachment petrifies him.

Georgie’s other loves are his maid Foljambe whose opinion he values over all others and his precious bibelots, a collection of prized items which he polishes daily with utmost care. [1]

The Owl and the Pussycat[] 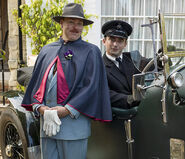 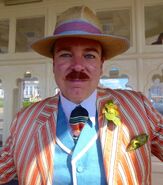